These rather hunchbacked specimens clearly live a simple life. In fact, the others frown upon their ways of doing so... They shoot green blobs of what seems to be their saliva when in combat.

Litters seem to think they are improving the hygiene of their surroundings by covering everything in their spit. They originate from the Sparse Fields, where there are a bunch of relics found of older

Litter civilisation. Their simple lives expanded from the plains to any other biome - they sure don't mind spitting all over the place.

In the end, their ranged skills are unparalleled by any other species. I can learn quite a bit from them in that area. 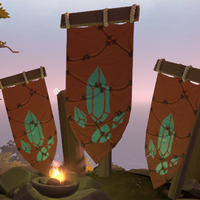 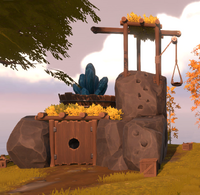 Litters are small creatures resembling a combination of lizards, geckos and newts. They appear in green, purple and orange, and though they do have various body shapes between thin and plump, they don't appear to physical vary as much as the other species in body type.

spystals on a burnt orange background. Their structures are stone buildings with turf roofs.

Litters are truly masters of range combat with their spitting techniques and extremely high rate of fire. Not only can they rapidly fire off three straight shots, but they can also spit an arching shot that reaches over cover and to high surfaces. This makes fighting litters from a range tedious, if not challenging, but it can be done.

One tactic is to shoot them with arrows from a close but high position to avoid their rapid fire attacks, but you'll have to be wary of their arch shot and bow strafe to avoid it.

Another tactic is to circle and melee, as their fire rate may be high, but they can't turn very quickly when shooting.

Litters are fightable in small groups, but be incredibly wary when they swarm.