This species definitely scared me at first sight, but they seem unprejudiced and decent, as long as you're not on their wrong side...

Krockers explain to have a strong desire to serve beings not physically visible in out world... They have a lot of rituals to support this too. Their shamanistic behavior seems to be a bit out of touch with their heavily aggressive way of expanding territories. Originally starting from the Soggy Woodlands, they now seem comfortable in any biome, as long as they have their bone-heavy ornaments with them.

I can learn a lot about both attack and defense from these creatures. 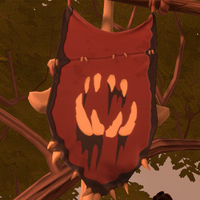 Krockers are a reptilian species strongly resembling a crocodilian with an underbite and long teeth. They appear in white, teal, green, and red, and in various body shapes from very thin to very fat.

The Krocker Crest contains eight white teeth with black slime or drool on a red background.

Their village structures are made primarily of white bone and red canvas tents and awnings, with some dark wood details. Even villager krockers - having no role and dropping no Role Token - carry a staff having an avian skull on top and a skull arm shield of an unknown animal.

The large and hulking

Krockers specialize in melee combat above all else. They lumber into battle swinging their staves and arm shields.

Krockers can unleash a powerful charge attack that knocks back enemies and temporarily stunning them. It is extremely unwise to engage in melee combat between several

Krockers at once, as you could find yourself being knocked back and forth between multiple

Krockers like a tennis ball and totally stun-locked until dead. Pacing yourself and taking them out one at a time is the smartest plan.

Krockers have a large and easy-to-hit head, making them susceptible to Critical Hits with the Bow. While they do have a charge attack, their usage of it against ranged enemies is surprisingly infrequent. This is very noticeable if one is trying to get the Battle of the Reptiles achievement, with the