The avian breed always want to appear in control of the situation, but when it comes down to it, they absolutely panic, it seems. They can be very aggressive in combat and seem to let go of any desire to look great.

Wherever they are, the

Gobbledew tend to look at the stars and seem to know not only their, but everyone's next move. Too bad they can't fly.

While they seem to think they're above everyone, I hope they can teach me a thing or two about defense and jumping agility. 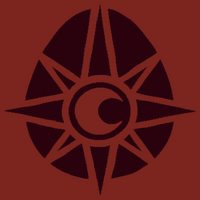 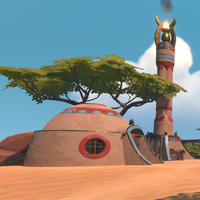 Gobbledew are an exotic avian species with physical characteristics of both peacocks and turkeys, however, unlike both of their real world counterparts,

Gobbledew do not have any sexual dimorphism, and all individuals contain bright colored plumage and large, fanning tails.

The Gobbledew Crest contains an egg symbol emblazoned with an eight pointed sun and a crescent moon. The crest can appear solid gold or blue and gold on a dark red background.

Their village structures consist primarily of rounded adobe structures with red and blue markings. Their architecture and clothing resembles a cross between native American and Arabic designs.

Gobbledew is an arduous task for many, but because these vain birds are extremely showy, they telegraph quite a lot before every attack. Their most powerful attack is a long distance, gliding leap that cannot be blocked an knocks down their opponents for a short time. If you try to put distance between yourself and a

Gobbledew, they will throw rocks at you for a bit less damage than their standard melee attack. The wisest thing to do in a fight with a

Gobbledew is to just keep moving and watch carefully their wings and tails.

Their well choreographed attacks also make them quite susceptible to parries, which can be a lifesaver when fighting a large group.