These are the wittiest species I have met so far. With their clever potion-making and alchemy skills, they seem to be ready for any battle but cunningly avoid conflict where they can.

Fexels apparently arrived on Albamare by boat at some point, looking for a place to experiment with their bombs and alchemy. The large crater in the Wedgewoods is a testament of that...

They are very cunning and I'll have to be careful dealing with them. Their ranged skills are great when throwing bombs and, combined with their impressive stamina, they make for a good ally. 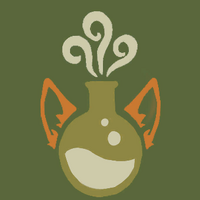 Fexel are fox-like creatures that are described as witty and clever and seem to specialize in potion brewing and alchemy. They appear in brown, blonde, and ginger and in body shapes from very thin to somewhat muscular.

The Fexel Crest contains a green potion bottle having white liquid and white smoke, orange fox ears on either side of the bottle, and all on a dark green background. Their village structures consist primarily of wood, some of it painted green, and have an old English style to them.

Fexel structures appear the most architecturally advanced of all the species.

When faced in combat,

Fexel excel in ranged combat due to usage of their powerful bombs. They tend to avoid physical combat but won't hesitate to swipe with claws, especially after throwing a smoke bomb. Their most common attack is the flash-bang attack that can temporarily stun their targets. Try not to fight them straight on, but instead circling around them to avoid their bombs. Bow strafing and dashing will help considerably in battles, but for the most part, keep moving. Standing still when fighting a